Get The Latest Listings

The Wright Group is pleased to announce that after careful consideration and strategic analysis, Millpond Plantation is no longer available for purchase and will remain with the original family. Consequently, new significant land holdings in the Red Hills Region will be brought to market this spring. Preservation of this iconic bobwhite quail hunting plantation has been a priority for The Wright Group since its listing debut, and the firm is happy to share that the historic main house and surrounding acreage will remain with the original family, who have established themselves as excellent land stewards and conservationists during their five generations of ownership.

Despite multiple market price offers following Millpond’s listing release, the family struggled with the contemplation of selling this landmarked property and cherished estate.  In its advisory capacity, The Wright Group was able to assess the family holdings and formulate a solution that allowed for the retention of the historic main house and surrounding acreage. In evaluating the overall family land holdings, which amounts to upwards of 10,000 acres, the firm identified that many of the non-core land assets could be sold at premium prices that create an overall offset.

The first of these is Conifer. Call our office to find out more on this exclusive sealed bid sale.

More than a century ago, Thomasville, Georgia was celebrated as one of the most fashionable places in the world to visit, voted the “Best Winter Resort” on three continents by Harper’s Magazine in 1898. During this Victorian era, many wealthy travelers came South by rail to enjoy the mild winter climate and the “pine infused” air. Attracted to the genteel sporting life centered around the pursuit of wild bobwhite quail, the area quickly became known its inviting climate, beautiful architecture and welcoming hospitality. Over one hundred years later, the plantation culture of the area is more vibrant than ever and continues to attract some of the country’s most influential families. Of all of the area properties, Millpond Plantation is understandably the most iconic.

The Wade family of Cleveland, Ohio purchased the property in the early twentieth century and hired the prominent Cleveland architectural firm Hubbell & Benes to design the home. Unlike the Classic Revival style homes usually associated with plantations built during the period, Millpond was constructed in a California Spanish revival style. One of the most distinctive features is Millpond’s atrium. It is constructed of large retractable glass roof panels that open and close with the season, providing protection to the indoor garden below- blooming with bougainvillea, palms, citrus, and camellias. The home is over 38,000 sq. ft. and consists of 11 fully appointed bedrooms and 10.5 baths, all of which are accessible to the veranda flanking the center atrium.

The elaborate grounds were designed by noted landscape architect Warren Manning, who apprenticed under Frederick Law Olmstead, and who also designed the intricate grounds of the Biltmore Estate for the Vanderbilt family in Asheville, North Carolina. By 1910, the entire complex was complete and to this day remains true to the original vision set forth by the Wade family.

Millpond Plantation dates back to 1860 when Thomas Clark Wyche, one of Thomas County’s pioneer families, first assimilated 1,600 acres and constructed a grist mill.  Jeptha Wade’s purchase in 1903 marked the continued expansion and improvement of this highly coveted property just minutes from downtown Thomasville. For over a century, Millpond has been managed with a strict emphasis on bobwhite quail habitat. During this timeframe, a perfect balance of native ground cover alongside an overstory of towering pines has been created and beautifully maintained. The same management ethic exists on the surrounding plantations including Milestone, Holly Hill, and New Hope which serves to further enhance not only the quail component of Millpond but also quality deer and turkey habitat.  In addition to 7 wild quail courses, Millpond also includes two established dove fields and a fully stocked 85 acre lake with the capability to be planted and flooded to further improve the duck hunting component of the property. 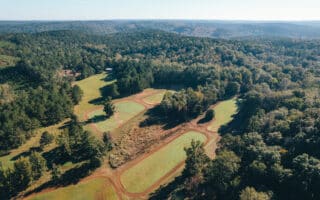 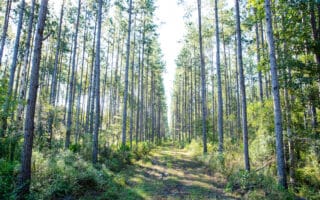 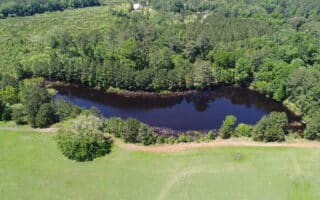